It’s that time of year when most, if not all, police forces bring out a campaign against drink driving. This article aims to cover all questions you may have about this offence.

The police can request a breath test, initially at the roadside, if they think you have been driving, that you have committed a traffic offence, or you have been involved in a road traffic accident.

You can be arrested if you refuse to provide a sample or if you fail to provide one without a reasonable excuse. The roadside test will give a result straight away.

The roadside test is a preliminary test, so if it is over the limit, you will be arrested and taken to the police station to take an evidential test.

If you cannot provide a breath test, for medical reasons, for example, you can be requested to provide a sample by alternative means. The other options are a blood sample or urine sample, at the officer’s discretion.

Failing to provide a sample without reasonable excuse is a separate criminal offence. The sentencing starting point for this offence is higher than for driving with excess alcohol, and it also leads to a disqualification from driving.

Many drivers believe that they do not have to provide a sample if you weren’t driving, but this is not the case. If the police believe you were driving, they can request a sample from you. If you refuse a lawful request, you could commit the offence of failing to provide, even if you can later prove you were not driving.

The legal limit in breath is 35 micrograms in 100ml in breath; in blood it is 80 milligrams in 100ml; urine is 107 micrograms in 100ml. The difficulty is that there is no easy way to say how much you can drink without being over the limit due to alcohol’s effect on different people. Any reading level will be impacted by the strength of alcohol, quantity and individual’s height, weight, gender, and physique.

Any person who has a drink-related driving conviction in the ten years preceding the offence will face a minimum three-year disqualification. This includes a previous conviction for failing to provide a sample and driving or attempting to drive.

In the case of high readings a medical examination may be required by the DVLA before the licence can be returned once the disqualification ends. The court can also allow a person to take a drink driver rehabilitation course at the expense of the individual. If a course is successfully completed, at an appropriate time, it can mean a reduction in the length of disqualification of up to 25%.

A special reasons hearing can be held if there are special reasons relating to the offence, which may mean a disqualification is inappropriate. This is a complicated area of law where legal advice is strongly advised. Special reasons could include circumstances where a driver’s drinks were laced or that a short distance was driven (with an emphasis on why it was driven and only for as far as necessary).

The sentence, and length of disqualification, depend mainly on the level of alcohol reading. The higher the reading, the longer the disqualification. Sentences at the lower end could be a conditional discharge or fine and go up to 6 months’ imprisonment for more serious offending.

Katie Price recently appeared in court for drink driving and also driving whilst disqualified, a combination of offences frequently leading to a custodial sentence. When she pleaded guilty, the sentence was deferred on condition that she had treatment at the Priory Centre and did not commit any further offences. As the conditions were complied with, she had a legitimate expectation that an immediate custodial sentence would not be imposed. The District Judge who imposed the sentence said Price deserved to spend Christmas in custody, but she could not go behind that legitimate expectation. A suspended sentence of 16 weeks imprisonment was imposed with a community order to undertake 100 hours of unpaid work and 20 days of rehabilitation work with probation. Additionally, she was disqualified from driving for two years.

The husband of comedian Alan Carr has also been in the news due to drink driving. Paul Drayton was four times the legal limit when he reversed into a police car. His case has been adjourned for pre-sentence reports, but he has been told that the starting point for the offence is 12 weeks imprisonment and to expect a prison term.

Another recent high profile case was that of Peter Scott. The app designer crashed his Tesla into a parked car on his way to an Alcoholics Anonymous meeting. He was disqualified for three years, and a suspended sentence of 12 weeks imprisonment was imposed.

[Image credit “Cocktails” by kimsdinner is licensed under CC BY-SA 2.0 ] 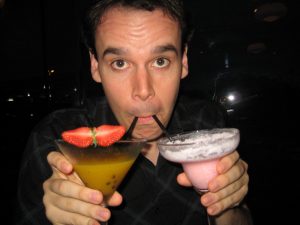